The Chase Is On

A Pointless Celebrity at last!

Want to get in touch with the show?
Text SCOTLAND to 82122
… or Tweet @HeartScotland to get involved.

No shows booked at the moment.

Des Clarke is one of the UK’s most exciting performers. He has made a name for himself as both a highly successful comedian and one of television and radio’s star presenters.

It all began for Des when he won a nationwide search to host the iconic Saturday morning show SM:TV Live. This weekly two hour broadcast showcased his abilities both as a comedian and presenter, including character sketches, celebrity interviews and comic monologues.

Not forgetting the honour of being asked to host the live Commonwealth Games Closing Ceremony to a global TV audience of 1 billion viewers.

Des is a much loved voice on the airwaves too and can be heard getting central Scotland home every day as host of the Heart Drivetime Show. He also fronts hit comedy series Breaking The News on BBC Radio Scotland.

Over the years he has interviewed some of the showbiz world’s biggest names including Ed Sheeran, Robbie Williams, Britney Spears, Justin Timberlake and Katy Perry. 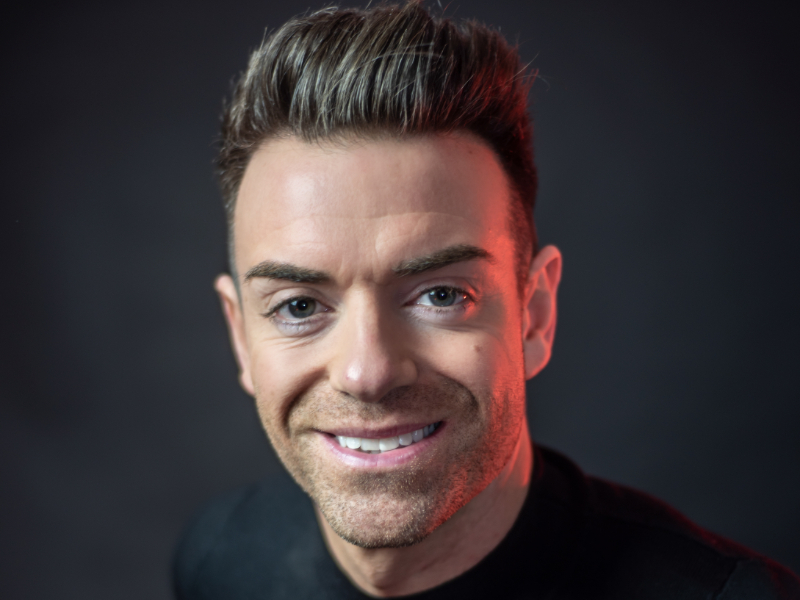 Stand-up comedy remains Des’s first love and he performs his own solo shows annually at the Edinburgh Fringe and Glasgow Comedy Festival. He has toured the world with his unique brand of observational humour, appearing on stage in New York, Dubai, Australia and Los Angeles. Des has also received critical acclaim for his comedy, winning Chortle Best Newcomer and the ITV Golden Mic Award.

He has also become one of Scotland’s best loved panto stars. Completing a record breaking 5 year headline run at the world famous King’s Theatre in Glasgow.

A high profile newspaper columnist and after dinner speaker too, Des Clarke has rapidly established himself as an exceptional all round performer.

Des Clarke may actually be the funniest man I’ve ever seen… Absolutely excellent.

Sunday Herald – League of their own

Clarke’s performances are in a league of their own. Onstage he is a racing car wrapped in an express train inside a space rocket. It could be terrifying if it were not for two things: Clarke has wide blue eyes with remarkably long lashes that lend him the look of a startled gazelle. And he’s funny. Very funny.

It’s not just the turbo-charged engine of his delivery; it’s the sparkplugs of random connections and word associations that fire it – collisions of words and ideas that take his material beyond observational humour.

The prodigious talent of Des Clarke shone like no other comedian. His versatility and natural instinct for entertainment radiated vivacity… he’s conquered the comedy world with his stuttering ingenuity. His energy is boundless. Des Clarke is on the cusp of stardom.

He’s a blistering cacophony of comic neurosis, whose fusion of speed and erratic nonsense is incredible. A true Scottish comedy genius in waiting

Touched by genius… Displaying unjustifiable depths of talent in someone so young. His comedy was astonishing and indescribably funny leaving the audience breathless

So funny it’s almost painful to watch him perform… genius in action.

Memorable, distinctive and very popular… he is a comedic Kalashnikov.

This boy could be a genius. He speaks in a stammering wall of sound… then a full sentence emerges it stands out as starkly as a rhyming couplet. The man’s a poet.

Frighteningly young and frighteningly talented, Clarke – with an E – is going to be a star.

Behind the nervous energy and apparent tangents lies a quick-witted comic mind. The result is something as entertaining as it is original.